The slope of a line measures its steepness; the larger the absolute value of the slope, the steeper the line is. If we don't know the slope, it's usually represented by the variable m. Why? Maybe because the French word for climb is "monter," but who knows? Some mathematician probably just chose m as the lucky letter.

One way to find the slope is to pick any two points, then count out how far we need to "rise" to get from the first point to the second point. 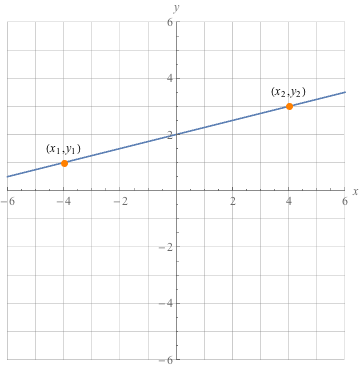 In the graph above, we need to go up 2 spaces from the first point to be in line with the second point. This becomes our numerator.

We simplify the fraction and get a slope of

We can also find the slope using a formula. Here's that formula.

Plugging these into the slope formula we get:

, which is the same answer we got using the other method.

See? Same answer. We can start with either point, as long as we're careful to keep both x1 and y1 on the same side of the fraction.

Notice that if we could walk the line from the left to the right, we'd be walking uphill. This means that the line has a positive slope. Lo and behold, the slope is positive 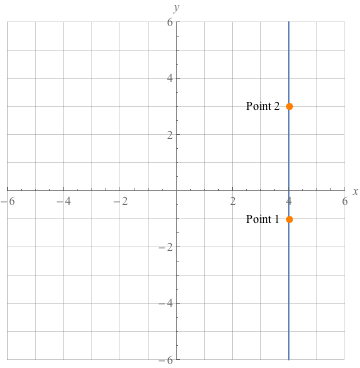 To find the slope of this vertical line, we can start with either point, but let's pick (4, -1) as the first point and (4, 3) as the second point. Plug these into the slope equation.

What about the slope of a horizontal line? 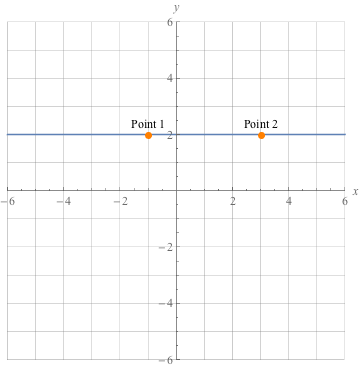 Plop these points into the slope equation.

We can have a zero as a numerator, which makes the value of the fraction 0. So the slope of a horizontal line is 0, which makes sense because it has no steepness at all.