In the following phrases, we're told the operation first and then the two numbers in the operation. We just keep them in the order given.

The quotient of x and 7:

Finally, some phrases combine several operations into one long expression. We translate in the order everything is given, with the exception of "less than," and it often helps to include parentheses. For example:

"Three times the sum of a number and ten."

Next is "the sum of," so we know we'll be adding something inside the parentheses.

Finally, "a number and ten" tells us we're adding a variable and ten. 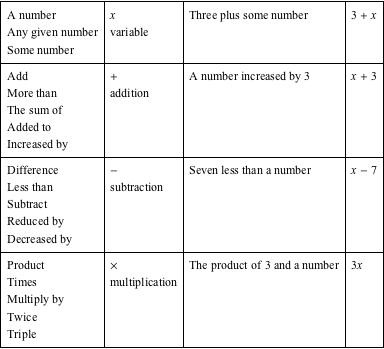 We'll need more practice before we go translating at the next international math conference, so be sure to check out the examples.