Similar figures are always the same shape, but not the same size. They have equal angles but not equal side lengths.

Check out a big square and a small square. They're both squares because they have four sides and four equal angles, but the sides aren't the same length. These squares are similar: they have the same shape but they are different sizes. Computers are great at creating similar shapes–think: shrink, enlarge, and resize. Here are a few more examples of similar figures:

Sometimes similar figures can be disguised. In the figure below there are two similar triangles, one within the other. They are the exact same shape but they are different sizes. 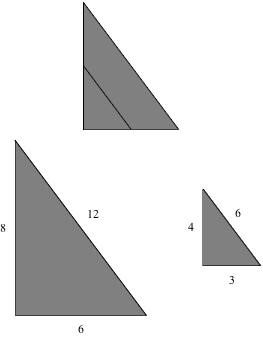