Thinking of natural numbers, we can transport ourselves back to simpler times. The good ol' days when our only responsibility was to show up for kindergarten class and not wet our pants. Aahhh, memories. It was at this point that we solidified our counting skills, and counting is what natural numbers are all about.

Whole numbers are very similar to counting numbers. Their only difference is the fact that whole numbers include the number zero. When we list whole numbers from least to greatest, we get 0, 1, 2, 3, and so on and on and on.

Whole numbers are a quirky bunch with some pretty strong character traits. We love them for their optimistic, the-glass-is-half-full approach to mathematics. They never accept negative numbers (or pouting) into their group, and they don't take any trash talk. Whole numbers also pride themselves on their goody-two-shoes wholeness, which means fractions and decimals aren't welcome either. They're pretty exclusive like that.

For more honest-to-goodness whole number examples, check this out. 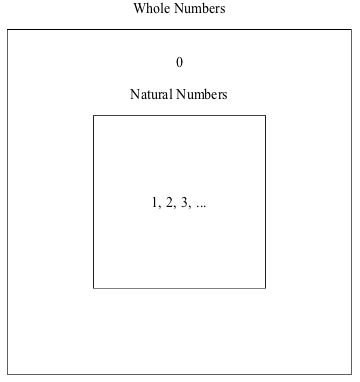 In the image above, the whole numbers are made up of every number in the big box, including the contents of ur you-know-whats off at -10 degrees. Temperature measured in Fahrenheit and Celsius can be positive or negative, and this is what makes integers different from whole numbers.

Although integers are tolerant and inclusive of negative numbers, they're pretty strict about wholeness, which means fractions and decimals aren't welcome. Hey, they've gotta draw the line somewhere.

For more on integers, visit here. Just be prepared to take the good with the bad. 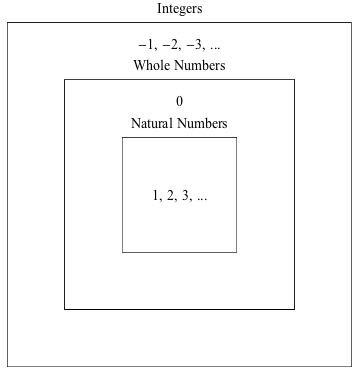 There are now three boxes. Numbers that are allowed in the biggest box, a.k.a. the integers, include all the numbers in the smaller boxes as well. So integers include negative numbers, whole numbers, and natural numbers.

, as well as the not-so-obvious numbers like -10, which can be written as

Rational numbers also include any decimal that can be turned into a fraction. Here are a few examples.

• 0.1 is a rational number because it can be written as

.
• 0.333333… is also rational even though it's an infinitely repeating decimal, because it can be written as

In fact, rational numbers are so accepting that they include integers, whole numbers, and natural numbers too, since these can be written as fractions with a denominator of 1. 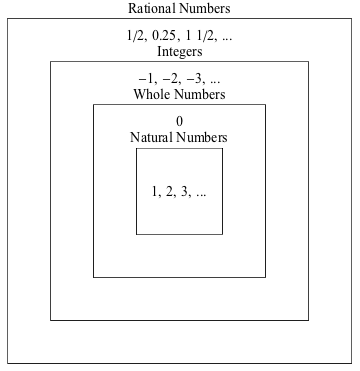 There are now four boxes. Numbers that are allowed in the biggest box, or rational numbers, include all the numbers in the smaller boxes as well. Rational numbers include fractions, mixed numbers, decimals, integers, whole numbers, and natural numbers. Rationals are a pretty inclusive bunch.

For more details on rational numbers, check this out.

Irrational numbers are like toddlers. They're hard to understand, they create havoc wherever they go, and they have endless, all-over-the-place energy.

The most popular irrational number is pi, or π. Pi is irrational because its value is a never-ending, non-repeating decimal that could never be expressed as a ratio a la fraction.

Just like a toddler flailing on the ground at the grocery store, pi is irrational.

The square root of 2, or

, is another irrational number because its value is also written as an endless, always-changing decimal that could never be expressed as a ratio or fraction.

Any time we find a number that can't be converted to a fraction, we can chalk it up to their unreasonable nature and call them irrational. Irrational numbers don't include any of the other numbers we've talked about. They're hangin' out there by themselves being unreasonable. Just don't call them that to their face. They're capable of anything.

To continue to explore irrational numbers from a safe distance, click here.

Real numbers are the most welcoming of all the numbers. They're like our good buddy, Old Man Oliver (OMO, as we like to call him). OMO lives down the street, gives the best advice, and has taken in twelve stray cats this year. He's also been known to save summer vacation, but that's another guide. Just like OMO has a hard time turning away needy things, real numbers have a tough time excluding numbers from their group. 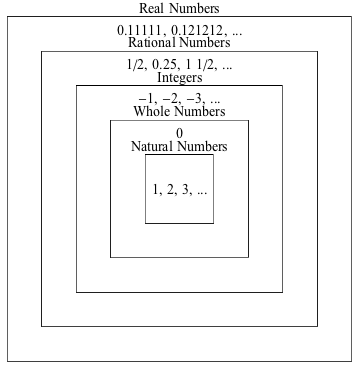