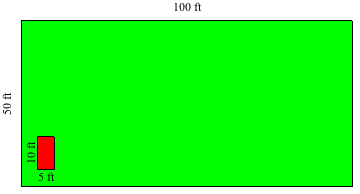 or 0.01. Then, we can move the decimal two places to the right to convert to a percent, and we get 1%. Looks like we’re safe hanging out there in the park for a while.

meaning there’s a 100% chance it will land on the blanket.

Luckily, a Parks and Rec employee moves the caged bird so it isn’t anywhere near our blanket. What are the chances of getting pooped on by the bird now? Because the target area does not include the blanket, the chances are

. Much better odds for a nap in the park.