Your older brother owns a '65 Ford Mustang that he's been working on repairing for the past few years. He fixed all the internal working parts already, and when it came time to paint it, he was at a loss. He asked you for input, and you graciously offered to help. After all, maybe he'll let you drive it too.

He cringed when you suggested a colorful mosaic and actually did a spit-take when you told him about an awesome rainbow tie-dye design (complete with swirls, peace signs, and smiley faces). But when you mention black with yellow and red flames from the front, his face lights up. It's perfect, and he couldn't be more grateful for your ingenious idea. 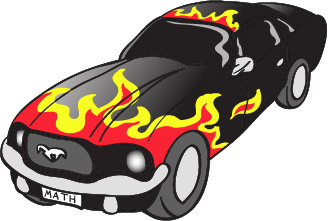 You know your chance when you see it. Offhandedly, you tell him that when he's done fixing it up, you wouldn't mind taking a ride in it. He says that he'll give you permission as soon as you know how a car works. You tell him how unfair he's being. He just says, "You need to know how the most important parts of a car work before you drive one."

What a jerk-face. You practically made that car for him, and he won't let you ride in it once? Suddenly, you get another ingenious idea. Smirking, you tell him you already know how cars work. He invites you to try and explain it, so you do.

You take out a piece of paper and a pencil and draw nothing but a circle. Pointing to it, you say, "It's just this, only spinning at sixty-five miles an hour." Your brother starts objecting, but you cut him off. "That's how the most important part of a car works, isn't it?" you ask with a smile.

The wheel, a great invention, is based on the geometric figure we call a circle. Knowledge of circles will prove useful, especially when you need to find circumferences, compute central angle measures, or cut a cake for 17 people evenly. You'll also learn that the arc (we're not talking about Joan, here) will come in handy when discussing circles. And if you get along well with polite men who have been in the sun, we can guarantee more tangents in this chapter than anywhere else.

You already used circles (and your cleverness) to guarantee yourself a ride in your big bro's fiery Mustang, but there's more to circles than free rides. They're probably some of the easiest shapes you'll come across, but that doesn't mean they're a piece of cake. A piece of pi, maybe.

What Pi Looks Like
A visualization of the many, many known digits of the number π. There's just…so many of them…

Sesame Street: Geometry of Circles
A Sesame Street video featuring the music of Philip Glass. Some interesting properties of circles show up in the animation. See if you can follow along and describe what's being constructed.

Where Pi Comes From
This is a short animation visualizing where π comes from. No, not the bakery.

Equation of a Circle
Watch this guy derive the equation for a circle from the distance formula.

Constructing a Tangent to a Circle
Put on your hard hat; there's some construction going on here. Today's project: a line tangent to a given circle.

Lost in the Northern Frontier
In this game, you'll use what is essentially a 2D version of GPS to find a lost astronaut. Circles can save your life, you see.

Sporcle: Circular Definitions
Match the circle-related term to its definition as fast as you can.

Circle Terminology and Practice
These terminology questions are designed to trip you up. Let logic be your walking stick.

Geometry: Working with Circles
You'll know the answers to some of these circle-related questions right away. Others may actually make you think for a few minutes.

Circle Geometry Review
A Jeopardy-style review game that'll make sure you know all the answers…er, questions…when it comes to circles.

Next
More on Circles Navigation