You've loved road trips since before you can remember. The fresh air, the clear blue sky, and the endless road stretching to the horizon and beyond. There's nothing greater than that freedom, that sense of adventure, that electrifying feeling of possibility. Or maybe you accidentally stuck your finger into the auxiliary outlet. Yikes.

Either way, you decided that the second you were old enough to drive, you'd buy a car and embark on the adventure of your life: a cross-country road trip with a few of your close friends. Your parents even said they'd help you pay for the whole thing, but only if your grades were as high as your expectations. 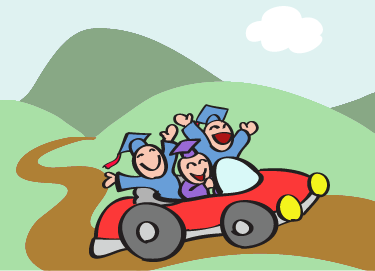 Since this is, you know, your dream and all, you're willing to play along. Hitting the books a couple more hours a week is well worth the two-month long payoff. Buckle down and study, and you'll reap the rewards soon enough.

Or at least you would if parallel and perpendicular lines weren't being such jerks. With as much as you've understood, those lines might as well be dancing the conga. You've been staring at your geometry book for hours and nothing seems to make sense—until you start daydreaming about your awesome road trip.

Suddenly, lanes turn into parallel lines, four-way intersections become perpendicular ones, and it all starts morphing together. Geometry and your road trip meld into one another, and you can't seem to tell where one ends and the other begins. Then, it dawns on you: geometry isn't just helping your dream come true—geometry is your dream come true!

We admit, it's a bit overdramatic (fine, a lot overdramatic), but parallel and perpendicular lines are nothing if not chock-full of Academy Award-winning drama. We're talking star-crossed lines that never meet and lines that crash into each other head-on. Honestly, what's not to love?

Math Is Fun: Perpendicular and Parallel Lines
A clean-cut and tidy explanation of perpendicular and parallel, along with a nice little app that lets you make and un-make parallel and perpendicular pairs. Thank goodness they aren't train tracks or you'd have a serious pile-up on your hands.

Mr. Vahn Parallel Lines and Transversals
A short and colorful lesson on parallel lines and transversals. Pay attention to all those special angle pairs that make a transversal so useful because we don't want to repeat ourselves.

Euclid: A Biography
What do Euclid and Steven Spielberg have in common? They're both famous, powerful, and masters of their craft, with works that will influence generations to come. What don't they have in common? Pretty much everything else.

Prove It: Parallel Lines
This interactive website allows you to build your own proofs by selecting from a pool of statements and reasons. Prove that angles are congruent, that lines are parallel, and that you're a geometry whiz.

Jeopardy: Parallel Lines and Transversals
A Jeopardy-style game about the important angles relationships formed by parallel lines and a transversal. These relationships last longer than those on the Newlywed Game! Don't forget to phrase your answer in the form of a question.

Oh, Sweet Parallel Lines
Guns 'n' Roses should seriously reconsider doing geometry-themed rock songs. They'd build a younger audience and make a fortune doing it. What a comeback that would be.

Euclid: The Art of Geometry
Mathematicians aren't just logical thinkers. Euclid was creative and artistic as well as brilliant. Of course, some mathematicians prefer congruence to color and proofs to pastels. We don't judge.

Next
More on Parallel and Perpendicular Lines Navigation