Shapes have most likely caused you quite a bit of trauma in the past. Seriously, fitting a square peg into a circular hole is no easy task, especially when your whole kindergarten class is watching. We don't blame you for crumbling under the pressure. We'd have been bawling too if we were in your shoes. 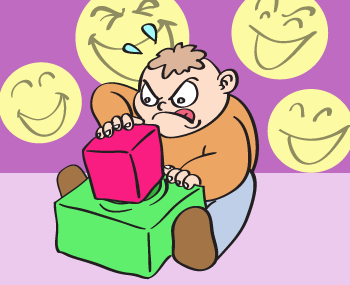 But you know what? That was years ago. All that therapy couldn't have been for nothing (and if it was, you owe your parents a big apology and an even bigger check). You're emotionally stable enough now to confront those shapes again. Take a deep breath, count to three, and face your fears.

Really, though, there's no reason to be afraid of shapes—especially polygons. They're completely and totally safe, assuming they don't shoot off the page and whirl around like two-dimensional ninja stars or something. But really, what are the chances of that happening?

A polygon is a closed two-dimensional shape that's made up of only straight line segments. We'll write that again in list form. In order to be a polygon, a shape must be:

Triangles, squares, rectangles, pentagons, and other more complicated shapes like the ones below are all examples of polygons. 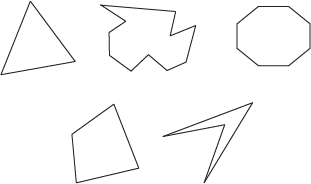 These shapes are not polygons. Can you figure out why? 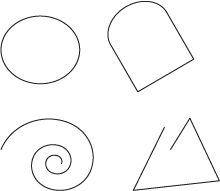 Even splitting up shapes into categories like "polygon" and "non-polygon" leaves a lot of room for uncertainty. There are two things mathematicians simply can't stand: uncertainty and waiting in line at the DMV. Of course, that last one isn't specific to mathematicians.

If polygons have sides that are all equal in length, angles that are all equal in measure, and daily trips to the loo, we call them regular. Regular polygons include shapes like equilateral triangles and squares. For any shape that has more than 4 sides, just put "regular" in front of the name (regular pentagon, regular hexagon, etc.) to indicate that it has routine bowel movements. 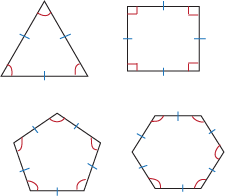 We've seen regular polygons all our lives, from that triangle in music class, to the friendly red octagon around the corner. Don't forget to stop by and say hello when you pass it. Seriously, it's illegal not to, and traffic school ain't all it's cracked up to be.

If we need to get more specific with describing polygons, we usually do so by the number of sides they have. Triangles have 3 sides, quadrilaterals have 4, pentagons have 5, hexagons have 6, and so on. You already know this stuff, so we won't bore you with it.