After years of intensive schooling, months of nonstop studying, and hours of excruciating exams, you've finally done it. You're a licensed architect. Congratulations!

Your family and friends are overjoyed by your accomplishment (as they should be!) and promise to take you out to a fancy dinner to celebrate. After all the studying you've done, you don't care if the fancy dinner is Taco Bell as long as it's not Top Ramen for the millionth time. Your parents insist on a four-star restaurant anyway, so you all dress up in suits and ties and get ready for a night on the town.

The restaurant has classical music playing in the background, maître d's in bowties, and those fancy cloth things called napkins that you've completely forgotten about. After the waiter takes everyone's order, your friends and family hold up their glasses to toast your success, but instead begin to chant, "Speech! Speech!"

Uh oh. You haven't thought of anything other than your exams for the past six months—not to mention the fact that you haven't slept a wink in the past 72 hours—and now you're expected to make a speech?

You start off coherent, thanking them for their unending support, but eventually descend into a garbled stream-of-consciousness about how much you loved playing Legos when you were young. It's all because of Legos. You couldn't have done it without Legos. Thanks to Legos, you're an architect. Seriously, how many times can you say Legos in under a minute?

Honestly, though, it's for a good reason. Sure, Legos are the bomb, but they're also why you wanted to become an architect in the first place. They're the building blocks of your childhood and your career…both literally and figuratively. 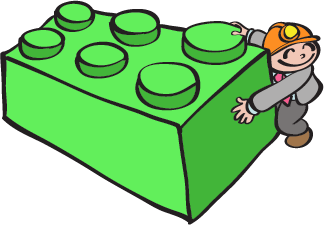 Just the same, everything in Euclidean geometry (which is what we'll be focusing on, primarily) is built on points, lines, and planes. Without them, geometry as we know it wouldn't be possible.

We'll throw in some angles and algebra just to make things interesting, but these "undefined terms" really are the essential building blocks of geometry. Play around with points, lines, and planes for a bit, and you'll be earning your architect's license before you can (figure out how to) say, "Balustrade."

Architecture Illusions
Did you know that the columns of the Parthenon aren't actually vertical? Read about how the Greeks used their knowledge of geometry to combat optical illusions. It might inspire you to design a building—or at least wiggle your pencil in a way that makes it look like rubber.

Counting in Babylon
Babylonians are the reason a circle has 360 degrees and an hour has 3600 seconds, not Tony Hawk or Cyndi Lauper. How and why did Babylonians create their complicated number system, and why do we still use it? Learn all about arithmetic—Babylonian-style.

Descartes's Biography
Are Cartesian coordinates really due to Descartes? We may never know for sure, but one thing is certain: Descartes was an awfully bright guy. Read all about the life of a brilliant thinker (a non-Greek one, for once), complete with references and an embarrassing photo. What a looker.

Undefined: Points, Lines, and Planes
You might think that points, lines, and planes are undefined because they're so intuitive. Not necessarily. Read about the different attempts to define the indefinable according to different classes of geometry. Are they all essentially the same, or are they quite different?

Non-Euclidean Geometry
Much of what we learn about geometry in schools is based on Euclid's interpretation of geometrical space. As fascinating and important as it may be, there's more to the world than just Euclidean geometry. Skim through some of these thoughts and musings for a different take on geometry.

Point, Line, and Plane
A video podcast on the description and naming of points, lines, and planes. These three objects are called "undefined" because it's nearly impossible to have an all-encompassing definition for them. This video gives a really good sense of these objects and it covers collinearity and coplanarity, too.

GDawg Enterprises: Points, Lines, and Planes
Tired of listening to monotone voices lecture at you about geometry? This video will clearly show you just about everything you need to know about points, lines, and planes, but it's set to some groovy music. Mute it if you want and watch the slide show, or rejoice in the learning of geometry with some killer dance moves.

What's My Angle?
This nifty tool allows you to measure, estimate, and control whatever angles you want. Answer questions, use a protractor, or simply explore the different angles you can make. You don't need a third degree to mess with these angles' degrees.

Banana Hunt
This game is more fun than a barrel of monkeys! Rotate the monkey to the given angle and you'll become the top banana in no time. The closer you are to the angle, the more bananas you'll win. After playing this game, you'll estimate angles better than a monkey's uncle. You'll go bananas for it. Hopefully you find the monkey puns a-peel-ing.

Next
More on Points, Lines, Angles, and Planes Navigation