Are you sick and tired of three-sided, triangular, geometric constructions? Why, of course you are! We'll bet you could use some time off to go out to the park and fly your kite. Maybe you feel like playing a game of baseball on the diamond. Perhaps a game of four-square with a group of friends sounds like fun. You could always hit the gym and work your quads and traps.

All puns aside, you can't honestly think you're off the hook that easily. Quadrilaterals are everywhere we work and play. Inventors, scientists, and engineers use basic quadrilaterals to create some of the craziest machines and toys around. And if we're going to build things using quadrilaterals, we need to understand these creatures inside and out.

How many sides do they have? What kind of shapes do they come in? Do they enjoy eating tuna salad and sailing? Probably not in that order—unless they want chicken of the seasickness all over the starboard. Gross.

In this chapter, we'll discuss why quadrilaterals are so much cooler than boring old triangles, the collection of shapes that makes up the phylum of the quadrilateral species, how the phylum relates to the larger kingdom of polygons and other kingdoms of shapes, and what quadrilaterals like to eat for lunch. (Hint: it's most definitely not tuna salad.) 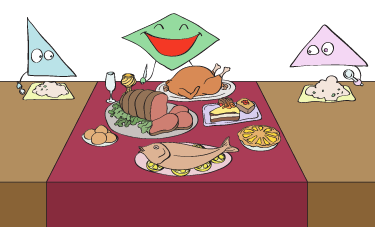 Lace up your learning boots, pack your protractor, and get ready to explore these four-sided fauna.

MathisFun
Having a tough time remembering which quadrilateral has which property? Take a look at this great website full of simple explanations and colorful graphics. Not a proof in sight to distract you. Just pure quadrilateral bliss.

Quadrilateral Quest
Click and drag these shapes according to their properties and prove that you've got what it takes to be a quadrilateral master. Unfortunately, no, you don't get a trophy.

Math Open Reference: Quadrilaterals
This useful resource about quadrilaterals will answer any other burning questions you might have about them. Plus, create your own quadrilateral by dragging vertices around. What could be more fun? Don't answer that.

Quadrilaterals Song
Got harmony? Got autotune? Got quadrilaterals? This song certainly has all that and some more. It'll take you to new levels of geometry and euphony. Just don't blame us if it's stuck in your head all day.

Stop-Motion Quadrilaterals
A super creative stop-motion film explaining the properties of some important quadrilaterals. Enjoy the music, enjoy the colors, and enjoy the art.

I Am A Parallelogram
Are you though? We'll need some convincing. If this parallelogram wants to prove himself, he'll need to convince us with all the properties he's got going on. And no, we aren't talking about his crash pads.

Quadrilateral Shape Shoot
Can't tell a rhombus from a rectangle? Don't worry. We've got you covered. After enough rounds of this game, you'll be well-equipped to deal with any quadrilateral that dares to cross your path.

Quadrilateral Properties Investigation
Click through these multiple games to double check that you remember all the properties of the different quadrilaterals. From guessing games and multiple choice questions to helpful glossaries and lists of theorems, hop on over to test your knowledge of rectangles, trapezoids, and rhombi and how they're alike or different.

ProveIt! Parallelogram Proofs
Think you have what it takes to figure out this parallelogram proof? We'll tell you now: it's a doozy. Solve this one, and feel free to do a few more while you're at it. Perfect the art of proving statements about quadrilaterals. Sounds easy, but it's not as simple as you might think.

Next
More on Quadrilaterals Navigation