We're through with the parallelograms. That's all of the major quadrilaterals, right? Uh...not so much.

There are a couple more families of quadrilaterals that don't really fit inside any nice box. They don't have the nice right angles of squares and rectangles or the equilateral sides of rhombi. They don't even have parallel sides like parallelograms. They're quadrilaterals gone wild. Basically, they've descended into anarchy.

Well, maybe it's not that bad. They aren't crazy, but they certainly don't play by the same rules that squares and parallelograms do. Right angles? They're for suckaz. Parallel sides? Who needs 'em! Kites are free riders, lone wolves who do whatever they want whenever they want. Ish.

A kite is shaped just like what comes to mind when you hear the word "kite." It might not have have a line with colorful bows attached to the flyer on the ground, but it does have that familiar, flying-in-the-wind kind of shape.

If we look at kite ABCD, sides AB and BC are congruent, sharing ∠ABC. Sides CD and DA are congruent and share ∠ADC. What about the other two angles? If you must know (which you must), the angles that connect two non-congruent sides in a kite are congruent. In this case, ∠BAD ≅ ∠DCB. 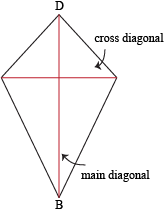 For example, the diagonals of a kite are always perpendicular. So even with their free spirits and lack of order, there's simply no escaping those right angles.

Prove that the main diagonal of a kite is the perpendicular bisector of the kite's cross diagonal.

Saddle up, because this proof might be a bit of a doozy. Of course, it still gets to the heart of what virtually all quadrilateral proofs are about: finding a lot of congruent triangles.

To prove that DB is the perpendicular bisector of AC, we can prove that AE ≅ CE and DB ⊥ AC. Ready? And break!

If you hadn't guessed it by now, there's more to the main diagonal than being a perpendicular bisector. It's also a bisector of the internal angles at either end. It only makes sense seeing as how the main diagonal is a line of symmetry and the two triangles are congruent. There were signs everywhere, so hopefully you saw that one coming.

In kite WXYZ, WY is has length 15 units, and ZX has length 30 units. What is the length of AW?

The cross diagonal is WY in this case, because it's shorter than the main diagonal. Since ZX is the main diagonal, it bisects WY into two pieces: AW and AY, each equaling half the length of WY. We know that WY = 15 units, so AW = 15 ÷ 2 = 7.5 units in length.

We're sure you're devastated, so just imagine being outside on a beautiful, sunny day. It's hot and humid, and you decide to treat yourself to an ice cream sundae. After paying the vendor, you eat the first few spoonfuls quickly. Too quickly. What happens next? You guessed it: brain freeze.

The pain surges up to deep inside your brain and fear consumes you. Your delicious ice cream is melting in the heat and there's not enough time to wait for the pain to subside. So what do you do? You drop the ice cream and rush to get a glass of water, hoping some hydration will wash away the pain. Luckily, it helps. But once you get back, you see a quadrilateral eating your ice cream. The nerve of some polygons! 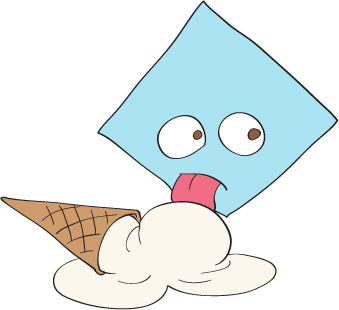 You suspect the devious culprit is a kite, but you want to be certain. How are you going to know for sure? Two easy ways:

You're able to discern that your ice cream thief is a rhombus. Is he also a kite?

Yes, a rhombus is a kite. A rhombus has two distinct sets of congruent sides (all of the sides are congruent), and the diagonals bisect each other at perpendicular angles. Guilty as charged.