Parallelograms are everywhere. They hide in plain sight, staring us straight in the face. Like towel rods and toilets, we use them every day and never give them much thought. Right now, as you read this, you are looking at a parallelogram. Yeah, that's right. Your computer screen is a parallelogram. Unless you have a particularly wonky-looking screen, that is.

Don't you worry your pretty little head about those specific parallelograms just yet. We'll cover those in more detail later on.

Since parallelograms are as common as a brain freeze at an ice cream shop, let's get down and dirty with them. Only not in the ice cream shop. That's just unsanitary.

Since a parallelogram is a specific type of quadrilateral, it comes with all the goodies that quadrilaterals have, like 360° of internal angles, opposite angles, sides, and vertices, and two honorable and generous diagonals.

Yes, we did just refer to those diagonals as "honorable and generous," and it's not because they donate to charities or volunteer at soup kitchens. It's because the diagonals of a parallelogram split it up into two congruent triangles.

Don't believe us? We can prove it. Can you?

Given that ABCD is a parallelogram, prove that ΔABC and ΔCDA are congruent. 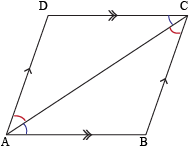 Bam! Congruent triangles. We don't want to say we told you so, so we'll opt for, "We informed you thusly."

But you know what's even better? Thanks to CPCTC (Corresponding Parts of Congruent Triangles are Congruent), we can prove three more theorems right away:

With all of these theorems about parallelograms, it's like we struck mathematical gold. But wait, there's more! Order in the next ten minutes and we'll throw in another theorem, absolutely free! Just pay $4.95 for shipping and handling. Or, if you'd rather not, you can get the theorem for free! Just handle it yourself.

Given that ABCD is a parallelogram, prove that its diagonals, AC and BD, bisect each other. 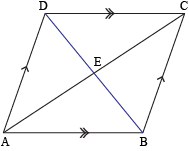 The key to this proof (and probably most proofs about quadrilaterals) is a theorem about triangles. Oh, you thought they were over and done with, did you? Well, we hate to burst your bubble, bud, but we learned about those triangles for a reason. And it wasn't just to make your math teacher happy.

We've established five different theorems about parallelograms. So it's only reasonable that we ask our favorite questions about mathematics. "Why do we care?" "What does this matter?" "How is this at all relevant to my life?" "Why are these little golden nuggets of wisdom important?"

Well, we could continue collecting these nuggets and eventually give Fort Knox a run for its money. On the flip side, we'd be hoarding a bunch of useless facts when we could be using them as parallelogram primers.

Given: Quadrilateral ABCD has two pairs of opposite sides that are congruent.
Prove: ABCD is a parallelogram. 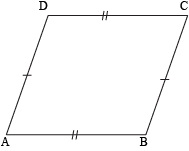 We can prove the rest of the theorems in similar ways, but we aren't going to right now. We'll leave that fun for later. Let's throw some numbers into the mix.

What are the lengths of FJ and JH in parallelogram FGHJ?