As we walk through the geometric jungle, we see all types of different mathematical creatures. The sun shines rays down on the landscape. A circle rolls across our path. Angles are chirping like the beaks of birds. And the colorful leaves at the top of cylindrical trees are shaped like polygons. 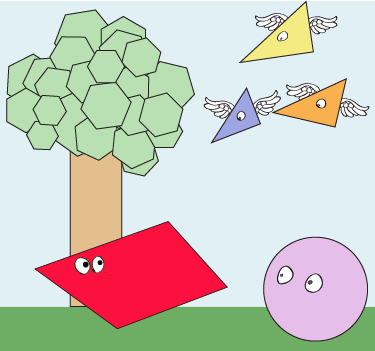 We need to be able to distinguish the quadrilaterals from the rest of the jungle's inhabitants. Simply put, a quadrilateral is just a four-sided polygon. We can remember this easily because "quad" means four and "lateral" means side. Nothing too shocking there.

There's one more part to our definition. The quadrilateral is a member of the family of polygons. They have only straight lines (no curvy hips), and all of the lines are connected at their endpoints to form a closed shape. Of course, quadrilaterals aren't like most polygons. They have some pretty special properties that set them apart from the rest of the polygonal world. Then again, that's what all polygons like to think.