Now that we've covered the most common type of quadrilateral that we come across, we can bust out our shovels and dig a little deeper for rarer quadrilaterals. How will we know if a quadrilateral is common or rare? Well, we should look for quadrilaterals that are somehow different and have special properties. They'll stick out like an opera singer at a mime convention. 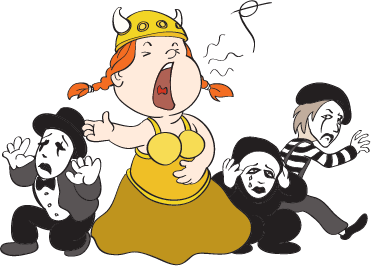 The first of these parallelograms is the rhombus, or rhombi in the plural form. If that's confusing, think "octopus → octopi." Of course, the whole octopodes vs. octopi debate is even more confusing. We'd rather not get into it.

Is the quadrilateral PQRS a rhombus?

PQRS is a parallelogram, but only opposite sides are congruent. Since PQ ≅ RS ≇ QR ≅ PS, this parallelogram is not a rhombus.

It's common knowledge that the diagonals of a parallelogram bisect each other. That's all good and fine, but the diagonals of rhombi take this hat trick a step further. Not only are they each other's bisectors; they're perpendicular as well. Ooooh, yeah. 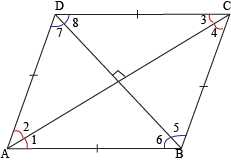 We're given that m∠AHI = 80° and we know that the diagonals of a rhombus are perpendicular to one another. That means ∠HAI is 90° in measure. These three angles form the internal angles of a triangle, which must add up to 180°, according to the Angle Sum Theorem for triangles. This means that ∠HIA is 180 – 80 – 90 = 10°.

Prove that the diagonals of a rhombus divide it into four congruent triangles. 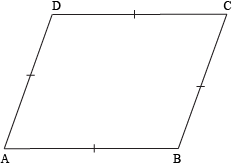 Naturally, there's more than one way to do this. We could use any number of different theorems and definitions about rhombi, but before we do that, why don't we draw in the diagonals? It'll probably help us out a bit. 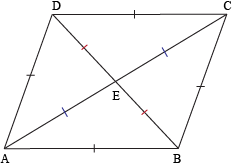 Now, on with the proof.

All we need to do to prove our theorems about the diagonals being perpendicular to each other and bisecting the interior angles is continue this proof using CPCTC and knowing a few definitions. You can probably do that yourself, so we won't waste your time with it.

But what if quadrilaterals need to prove that they're rhombi? For instance, MARK is desperate to prove to the Quadrilateral Committee that he's more than a just a predictable parallelogram. He's a rhombus—but how can he prove himself? 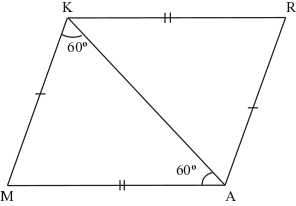 MARK will need to drop to his vertices and plead. But the members of the Quadrilateral Committee are pretty straight-laced. They aren't at all swayed by his groveling. They'll need proof that he's a bona fide rhombus, so having an interior angle sum of 360° or bisected diagonals isn't going to cut it. Any old parallelogram could just as easily satisfy those requirements, right? But MARK will have to prove a little more to achieve rhombuship. He'll need to convince them in one of these ways:

For instance, MARK could prove that he's a rhombus like this:

Congratulations, MARK, on having earned the esteemed status of Rhombuship, officially approved by the Quadrilateral Committee. Next step: Kitehood.