Second Derivatives and Beyond Introduction

Second Derivatives and Beyond Introduction

Dr. Shmeuss and his trusty companion, Bella, have decided to start a new hobby, spelunking. Not only are they looking for adventure, they're looking for treasure. Dr. Shmeuss is a huge fan of The Hobbit, and he has hopes of becoming as lucky as Bilbo. They gather their ropes, don their headlamps, and head into the cave. They don't go far when they run into a drove of convicts who are, of course, also spelunking for treasure. They've walked into a con-cave. The cave starts spinning. Which way is (concave) up or (concave) down? They hightail it out of there, changing their velocity with respect to time until they reach safety. 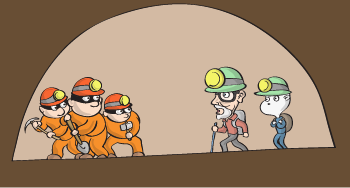 What does a con-cave have to do with second derivatives? Nothing. However, the term concave actually does. Not to mention acceleration is the second derivative of distance with respect to time.

We can also use the first and second derivatives to the find maximum and minimum points of a function.

For the grand finale, we'll draw graphs of wild functions without calculators. Once we know where a function turns around and where it changes shape, we can draw a good picture of what it looks like overall. Keep the calculator close, but mostly for finding approximate values and for checking answers.

Second Derivatives and Beyond Resources

Graphing Functions Using First and Second Derivatives
Let’s be honest: not much has changed since kindergarten. We still get to draw lines and pictures in calculus class. Hard to believe your tuition goes to help teaching you how to draw lines.

Concavity and Points of Inflection
We said inflection, not infection. This is an upbeat take on first derivatives, second derivatives, and points of inflection. You could call it calculus with a smile.

Critical Points
Critical points aren’t something to fear. There isn’t a mutant cat lurking behind them. Just in case, learn how to spot those critical points before the creepy cats spot you.

First and Second Derivative Tests
The first and second derivative tests sound like something your doctor would do to check if you’ve contracted the ebola virus. You have nothing to worry about. This link shows you how an engineer is more likely to need this test than a doctor.

Finding Relative Extrema Using the First Derivative
Most people try to avoid their relatives. Imagine actively trying to find them instead. Relative extrema, that is.

Curve Sketching with Derivatives
When your art teacher tried to teach you how to draw a rabbit, it might have felt like pulling a rabbit out of a hat. Drawing functions are easier, especially once you know their derivatives.

Absolute (or Global) and Local Extrema of Polynomial Functions
You need to be at one with polynomial functions. This video about extrema of polynomials will put you in a zen-like state.

Optimizing to Make a Bridge
Knowing calculus helps you build bridges. At least it helps these guys. Check out this video of how a bridge is made by finding a minimum of a structural function.

Excel First and Second Derivative Plotter:
Anything you can do with complicated computer code, you can do with a computer spreadsheet. It’ll just take you a while to make it look this good. Here’s a numerical first and second derivative plotter for Excel.

Next
More on Second Derivatives and Beyond Navigation