By now, we're masters of kinematics and how things move: blocks sliding down ramps, catapults launching balls, mobiles balancing, gravity...gravitating. But we came to study physics for something more, right? Car crashes, gun shots, explosions—they're all hallmarks of any good Die Hard movie and any good physics curriculum. But we can't get all John McClane on the universe with just forces and equations of motion. We need more.

We need energy and momentum.

The words sound the part, right? We have a lucky situation here where the words in your English class and the words in your physics class are actually pretty interchangeable—writers tend to use the words energy and momentum in the same way physicists do. Physicists just use more math. And tend to read less Chaucer.

Here, we'll talk about all the physics we need to fully appreciate a good action movie. You thought Bruce Willis was cool before? Well, wait until you see the math he does in his head to figure out exactly how to drive a sedan through a helicopter. He's a regular ballistics savant..

First up is momentum. Momentum is the product of an object's mass and velocity. It's intimately related to Newton's laws of motion: if you apply a force to an object for some amount of time, its momentum will change; this is called impulse. Conversely, a large change in momentum will impart a large force—something Indiana Jones is all too familiar with, whether he's running from a giant boulder rolling down the halls of a hidden jungle temple (lots of mass, low velocity) or a bullet fired from a Nazi Luger (tiny mass, huge velocity). Both are going to hurt.

Energy is more intangible, but don't make the mistake of throwing it aside as a boring mathematical abstraction. It is, in physicist-speak, the ability to perform mechanical work, which roughly translates to "energy lets an object do stuff''—a roller coaster won't move unless you pull it up a chain lift, the chain lift won't move unless you fill the engine with gasoline, gasoline wouldn't turn the motor if it wasn't made of liquefied fossil algae, and those algae wouldn't have any energy to give if they hadn't photosynthesized it from the sun millions of years ago. The rate at which an object does work is called power—a 400 horsepower Ferrari, for example, can move you quite a bit faster than your 100 horsepower Prius.

When we deal with momentum, conservation usually means one object transferring its momentum to another after a collision (think boulder to Jones); energy is again slightly more abstract. Conservation of energy can involve transfer of energy in collisions, but also covers the conversion of energy into different forms within the same object. A roller coaster at the top of a hill, for example, has a lot of gravitational potential energy—it could start moving at the slightest push. When it drops down that first hill, its potential energy is turned into kinetic energy—the energy actually associated with movement, not just the ability to move. There are many more kinds of energy; we'll take a look at the types we see in mechanics in this chapter.

These conservation laws apply to isolated systems, that is, a group of objects we define as not interacting with anything else in the universe. The size of a system can vary from a block on a table to the earth revolving around the sun to the entire universe—it's up to us based on how complicated a problem we need to solve (hint: if the question asks about a wood block sliding down a hill,then we probably don't need to consider the gravitational influence of the Alpha Centauri system on its orbiting planet in our system).

Energy will be conserved if the forces involved in our system are conservative forces, or ones that are based on position, such as gravity or springs. Non-conservative forces can take energy out of our system, as is the case with friction, which turns kinetic energy into thermal energy, which then leaves the realm of mechanics.

We, however, are staying in that realm—and about to discover the coolest, most action-ridden part of mechanics. Buckle your seat belts.

(Seriously, buckle them. They're really good at increasing your stopping distance and therefore lowering the impact force...but more on that when we talk about mechanical work.) 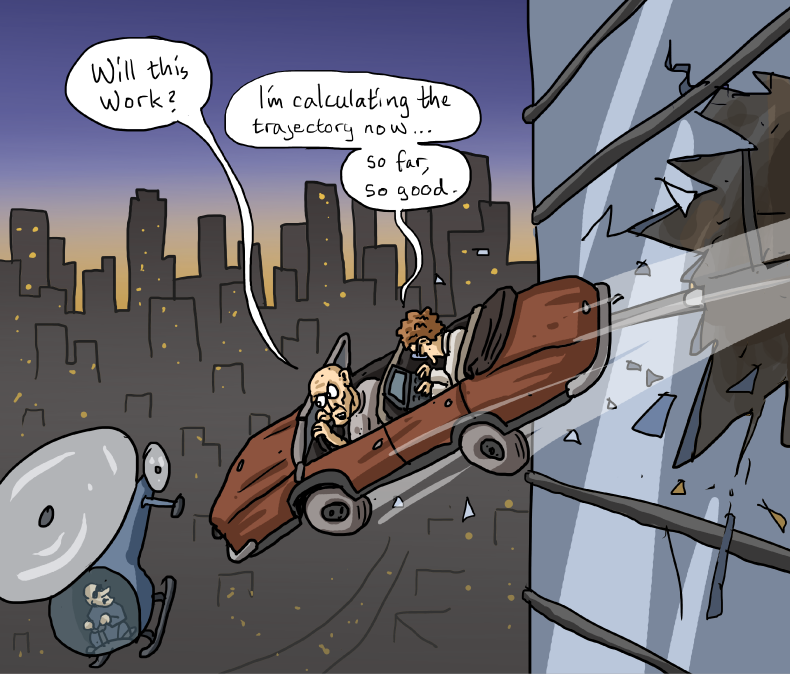 Physics Simulations
The University of Colorado at Boulder has a great collection of interactive physics simulations. Just think of them as Starcraft for scientists. You can check out the ones on work, energy, and power, or whatever else strikes your fancy.

Flash Sledding
A flash game as old as the Internet itself, Line Rider is still a great introduction to how much kinetic energy you need to get over that hill.

Great Moments in Momentum
No one explains momentum quite like the man—the legend—Bill Nye the Science Guy. Wait for the end, when he shows a clip of what we can only assume is motorcycle polo.

Wind Power in Malawi
Faced with the choice of starvation or innovation, William Kamkwamba probably made the right choice and created a windmill to irrigate his family's farm.

Nuclear Fusion
Currently, all of the world's nuclear power plants use fission, splitting big atoms like uranium into smaller ones. But the ultimate goal of clean power generation has always been nuclear fusion, combining smaller elements into bigger ones—we just need to be able to make temperatures comparable to our own existing natural fusion source (which, of course, is the sun... so no problem, right?).

Speaking of Fusion...
They Might Be Giants explain the physics of solar fusion. Sort of.

Orders of Magnitude
One of the most useful skills in physics is the ability to tell whether or not a number is reasonable for the quantity it represents. A key way to do that is to know, roughly, the order of magnitude of various benchmarks—if you end up with an answer that says your block sliding on a table has as much energy as the yearly electricity consumption of the entire country of Norway, you've probably added an extra zero (or seventeen).

Tour de Physics
How steep a hill can a professional bike rider successfully climb? Well, a steeper hill than we can. But the limit is power—and without strapping a horse to their carbon-framed bicycles, eventually even professional cyclists will have to give in to the limits of human power production.

Where is the Ambassador?!
Darth Vader may be strong (he is, after all, more machine than man), but he still probably had to use the Force to lift a rebel captain the way you see at the beginning of Episode IV. And he finds your lack of faith disturbing.

Next
More on Energy and Momentum Navigation