Okay, so two flavors. But the distinction between those two is important—what type of crash occurs in our problem determines what equations we can use to solve it.

In the case of both elastic and inelastic collisions, momentum is always conserved and becomes a useful tool for solving any problem dealing with collisions. For elastic collisions, our two conservation laws—momentum and energy—give us enough equations to solve for the velocities of both colliding objects.

Here's an example: two blocks, one weighing m1 and the other weighing m2, are sliding towards each other at v1,i and v2,i, respectively. 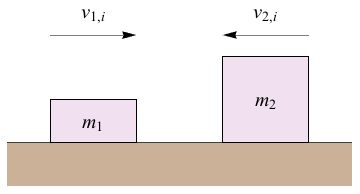 After the blocks collide, their masses don't change, but their velocities do, so that block 1 is now traveling at v1,f and block 2 at v2,f. Applying the laws of conservation of momentum and energy gives us this system of equations:

And if you thought that was a lot of algebra, well, you'd be right. Sorry about that.

Here’s another example: If Indiana Jones isn't quick enough the boulder will collide with him in an inelastic collision. Indiana Jones weighs mij and is running unsuccessfully away at vij,i. The boulder weighs mb and is rolling at a constant vb,i. If they collide, Indy sticks to the boulder, and thus their final velocities are the same at vf. Conservation of momentum gives us the following:

If an object is stationary, all of these formulas still apply—a stationary object just has a velocity of (you guessed it) zero.

In an inelastic collision, kinetic energy may not be conserved, but total energy definitely still is. A lot of it is just transformed into sound or heat—or the total mechanical destruction of an otherwise perfectly solid object.

Previous Next
More on Energy and Momentum Navigation