Now, it's time to define another macroscopic property and simplify our lives.

We've heard magicians asking innocent volunteers to lay down on a bed of nails. As scary as it sounds, this trick is not dangerous at all if performed properly. No, there is no sorcery going on, just good old physics.

Stepping on a single nail hurts a lot. The force of that single puncture is not only extremely painful, but may have turned into two punctures with the addition of a tetanus shot. The same painful thing would happen if magicians performed their trick with a one-nail bed unless that magician was Dumbledore.

The magician's trick (yeah, they always have one) is to use many nails, not just one. What would happen if we grouped 100 nails together in one small clump? That's right, another hospital visit, but the force of these nails would be diluted, since the force is spread over a larger area.

The nails exert a force over a certain surface area. What area? The area of the nail tip for one nail in a one-nail nail bed, or the area of all of the nail tips in a proper magician's bed of nails. We just stepped on another property called pressure. 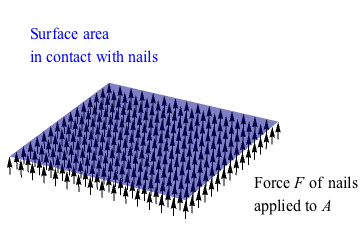 Now, we see why the nails don't injure the poor volunteer from the audience. The area of the bed of nails shares the weight (force of gravity) of the volunteer's body, so there is less pressure on the area of a single nail. This implies pressure is inversely proportional to area. However, what truly matters is minimizing the ratio between the force and the area. In math, we say that

. As long as this ratio is kept small enough to not puncture skin, the magician is good to go (and the innocent volunteer, too). The show must go on.

, this means pressure has units of Newtons per meter squared, where

To help illustrate that pressure is inversely proportional to area, think of a water hose, turned on at full force. When the end of the hose isn't covered, the stream of water lands a few feet away, but what happens when we cover part of the hose with our thumb? Go ahead and try it. Spray as many people as possible.

Yes, by covering part of the hose we reduce the area, which means the pressure of the water increases, thereby increasing the distance before the water hits the ground.

We're accustomed to seeing temperature affecting states of matter. Liquid water can freeze to solid ice in the middle of winter, but it can also boile and evaporate into steam in a teakettle over a fire. Temperature isn't the only thing that affects states of mater, though, can you think of anything else?

Yes, we can inhale it and sound like leprechauns, but that's another lesson. If we put helium gas in teakettle over a fire, we'll excite the helium atoms, giving them more energy to fly around, but they'll remain a gas. How can we turn helium into a liquid or a solid?

The molecules of any gas are further apart than they are for any liquid or solid. But if we apply pressure to a gas, we force these molecules to get closer and closer to one another, and with enough pressure, a gas will turn into a liquid or a solid. That's one way to turn a gas into a solid or a liquid.

Another way is to take away the energy of the molecules, that means cooling it down. If molecules don't have much energy, they'll get closer to one another and start forming bonds.

To keep things that want to be gases (like helium) as liquids, we have to keep it cold, or keep it under pressure, or both. Do you smell that? Yup, it's another property.

We call this property compressibility. Compresibility describes how much we can squeeze something together.

Liquids are difficult to compress because their molecules are more or less already as close to each other as they can be. However, the molecules of gases are very far away from each other, so they compress easily, and that results in a phase change, changing the gas into liquid. 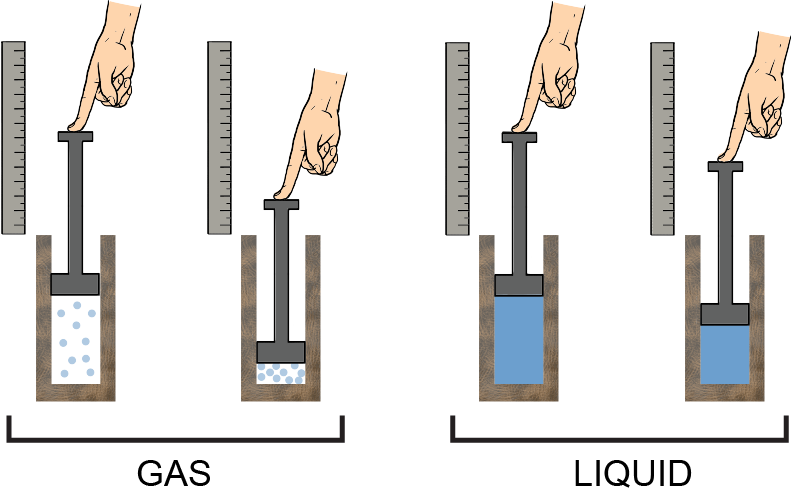 A picture is worth a thousand words: it's a lot easier to compress a gas in a container than a liquid. With the same reasoning, it'd be even harder to compress a solid. An incompressible fluid then, by definition, has a constant density, no matter the pressure or temperature. 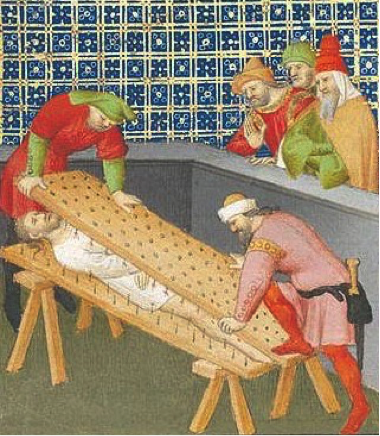 Beds of nails were actually a form of torture used by Carthaginians around 255 BC.5 Their beds didn't have enough nails to properly support a human body. Aren't we glad we live in the 21st century?