We know what solids look and feel like. Ice, for instance, is a solid. Skate on ice and the heat from the blade will melt the top of the ice into liquid water. The change permits us to land double axels with grace à la Scott Hamilton without ripping our glittery tights.

Boiling water for cocoa after a session of ice-skating turns some of the water into steam. So water exists in three states of matter at the ice rink: a solid, a liquid, and a gas. How cool is that?

The biggest misconception about fluids is that they are all liquids. Fluids can actually exist in all three phases of matter. All gases and all liquids are fluids, as well as a few solids known as "amorphous solids," like glass.

A fluid is matter that flows when a force is applied to it. Period.

The thought of a solid as a fluid is hard to swallow, at first; after all, if we press on a solid, nothing seems to "flow." However, things aren't always what they seem. Although solids appear rigid, it turns out the molecules of some solids aren't bonded rigidly enough, so they flow, but they flow very very very slowly. We call these flow-friendly solids amorphous solids.

The molecules of non-amorphous solids (like salt) form patterns that lock into place and hold on tight, so no flow occurs.

Liquids take the shape of whatever container we pour them into, like an olive oil bottle, a peanut butter jar, or a piranha tank. Liquids can move (flow) better than solids because their molecules aren't strongly bonded to each other, so the molecules slide on top of one another. 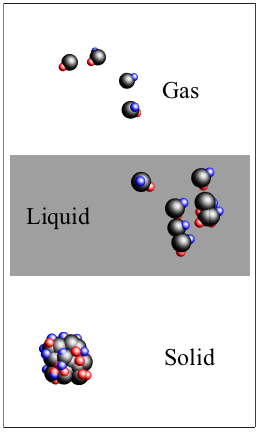 The molecules of gases are like James Dean: too hot to be tied down. Gases still take on the shape of a container we put them in, but they treat it more like a mosh pit. Gas molecules zip around from left to right or right to left, going up or down, and back again doing whatever, sometimes colliding into each other without cohesion. If they hit a wall, they just bounce back with plenty of energy.

The molecules of amorphous solids act like liquids but more slowly: glass doesn't take the shape of its container in a mortal time frame.

Therefore, molecules in all three phases of matter can move when forces are applied to them, except not all kinds of solids are fluids so those ones don't.

We sometimes get confused because these three states appear different for the same substance. A water molecule is fundamentally two hydrogen atoms bonded to an oxygen atom. Yet the same H2O molecule appears to be different at different temperatures: It's frozen below 0 °C, stays liquid at room temperature, and begins to evaporate into steam at 100 °C. But water is water, no matter its state of matter. (No pun intended.)

Amorphous solids are not always called solids at all, but supercooled liquids. Talk about supercool.