Data are like gold for scientists. Not because they can help them buy that two-story hamster dream house they've been eyeing. Data are evidence that scientists use to support their claims about their hypothesis. It's basically their back-up posse.

It's Not All About The Numbers

Where does one find these all-powerful data? By trying to answer our experimental question, of course. We could do an actual experiment, or simply observe a phenomenon, but either way we're going to end up with some kind of data. Now, there are as many different kinds of data as there are Pokémon, and what we end up with totally depends on the experiment we're doing.

For example, if we're testing the effects of music on plant growth, we're going to end up with a lot of data about plant height and maybe some observations about the appearance of the plant. If we're studying the complex relationships between goldfish, well, we'll probably have a lot of descriptive observations about fish faces.

We can divide data into two categories: quantitative and qualitative. Quantitative data are any data that involve numbers. These would be things like our plant height data, the number of marshmallows we can fit in our mouth at a time, how many times our cat sneezes in a day, or the number of seconds it takes us to eat a Big Mac.

Qualitative data are all the other data that don't involve numbers. See, some experiments involve studying things that can't really be summed up by a number. For example, we may be studying how snakes behave right before they strike their prey. This is really more of a situation where we want to sit back (waaaay back) and watch what happens. Hopping in front of a pit viper with a ruler to measure their fangs before they sink them into our leg isn't really science, so much as a one-way ticket to the emergency room.

Instead, a sane scientist would record observations about the physical features of the snake, like "the upper half of its body is coiled in an 'S' shape" or "its tail is rattling louder than my heart is pounding." Notice how there were no numbers in those observations? That's no accident, that's qualitative data.

To sum up, quantitative data deal with numbers and things that can be measured.

Qualitative data deal with descriptions and things that can't be measured, like color, taste, smell, or behavior.

Keeping Our Variables In Check

Okay, we agree that data are good. So how do we go about collecting them? Well, again, it's going to depend on the experiment. No matter what experiment we're doing, we'll want to control our variables to make sure we know exactly what's causing the results we get. No need to sign up for variable obedience class, we'll show you the ropes.

An experiment needs a control group and a variable group. The control is all the stuff that stays the same in the experiment, while the variable is what's changing. To really pin down what's causing the phenomenon we're observing, we'll want to make sure to change one thing at a time. Want an example? Here ya go:

Let's say we want to know if different types of cheese make a mouse run through a maze faster. Our money is on Gruyere. The variable here is the types of cheese. The control is everything else our mouse might encounter. This means our mouse should have the same amount of food, water, sleep, play time, and be tested at the same time of day.

What happens if we don't control our variables here? Well let's say Mr. Mouse gets an extra helping of food right before his trial on Thursday. That puts him into a food coma and makes him sluggish and disinterested in cheese. His focus is on laying his head down on some wood shavings, not racing through that maze. So, was it the flavor of cheese that affected his time? Or the extra helping of food? We wish we had controlled those variables…

Keep in mind that it's not always possible to control everything. For example, we can't control the quality of each mouse's sense of smell or how quickly a mouse metabolizes its food. And sometimes we don't even want to control all of the variables. We may want to let them run free and see what happens when they interact with one another. Like, does a mouse that gets different amounts of sleep prefer a sharp cheddar or a gooey brie?

Of course, an experiment isn't always the best way to answer our questions. Sometimes sitting back and making observations is the fastest way to find out who's the boss within a pod of dolphins or how a boy turkey convinces a girl turkey to go out with him. In this case, there are a lot of variables that we can't control, so we just have to take a deep breath, control our inner control freak, and take those variables into consideration when we make our conclusions.

Where Did That Dart Go?

Then there's the actual data collection process. It could be as simple as opening our eyes and writing down what we see, or we might need to bust out that fractional distillation equipment we have just lying around. Either way, data aren't worth anything if they aren't accurate and precise. 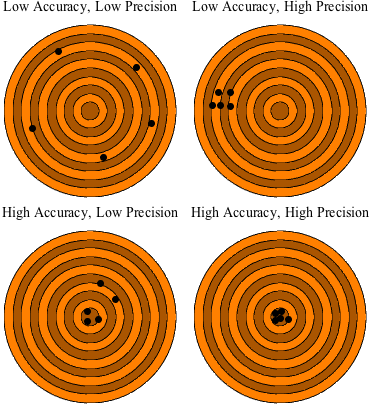 Let's start by talking about what it means to be accurate. Accuracy is how close our measurements are to the expected value, or basically how close we get to the true value. Obviously, the closer we are, the better. For example, let's say our friend gives us a ride to school and says they'll be at our house at 7:45 a.m. If they arrive at 7:46 a.m., that's pretty accurate. If they arrive at 8:01 a.m., well, that's a lot less accurate. Also, we might take the bus tomorrow.

So what's it mean to be precise? Precision means getting the same results over and over again. If we repeat our experiment a bunch of times and still get the same data, those data are precise. If our friend shows up at 8:01 a.m. every day of the week, then, yes, they're late, but at least they're precise. And seriously, we're really thinking that the bus might be worth investigating.

Is it better to be accurate or precise? In science, and carpooling, it's really best to be both. A friend who picks us up on time every single day is totally a keeper. Data that are super close to what's expected a whole bunch of times? Well, they're keepers too. Yes, that means scientists have to repeat their experiments a whole bunch of times, but that's the price we pay to be taken seriously in the science world.

It's easy to get tripped up on the vocabulary terms we covered here. Seriously though, could qualitative and quantitative be any more similar? Here's the trick: just remember "quant" sounds like "quantity," which has to do with numbers. "Qual" is like "quality," sort of like how we think our subtle sarcasm is our best quality. Our eyes aren't bad either.

To make sure you hit accuracy and reliability on the mark every time, check out this bulls-eye visual. We like it better than writing out the definitions one hundred times each.

Analyzing DNA is a super accurate and precise way to determine who was (or wasn't) at a crime scene. Since 1989, over three hundred and forty people have been exonerated as direct result of DNA evidence.5 Science for the win.