Since all of Newtonian physics relies on time and distance, we correctly anticipate that concepts dependent on time and distance change too. How do energy, work, force, and momentum change in special relativity? Buckle up: relativistic rides are out of this world. We mean that literally.

In Newtonian mechanics, we defined momentum as the product of mass and velocity, p = mu. We also associated mass with an amount of inertia, the tendency of an object to remain at rest or travel at constant velocity. The more mass, the more inertia.

Does the law of inertia apply to energy too? In other words, does energy also have inertial mass?

Einstein's most famous equation E = mc2 describes just this. Energy is simply equal to mass times the speed of light squared. This is the relationship we use when we explained nuclear reactions8.

There's a thought experiment ("gedanken" to Einstein) that allows us to come to that conclusion ourselves.

Picture the following scenario. We have a box of mass M and length L that is at rest initially. The box emits a burst of photons from one end: 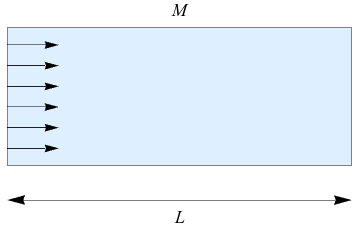 ,where E is the energy of that photon. Because of the law of conservation of momentum, the total momentum of the system consisting of a box plus photons must be zero. This means the box acquires a momentum equal and opposite to the photons',

Since momentum is both p = Mv and

, we can write that

and solve for the recoil velocity v, such that

The photons reach the end of the box after traveling a distance equal to its length L. This occurs in a time interval Δt equal to 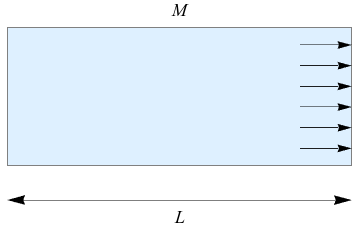 When the photons reach the end of the box, the box recoils again by a distance Δx and returns to its original position. Since displacement is equal to velocity multiplied by time, or Δx = vΔt, we can write that

.The center of mass of the photons, C(photons), would be

.Since the total center of mass doesn't change, we can add the two together and set it to zero, as it would be if the center of mass of the entire system stayed as it was.:

This is known as the principle of mass-energy equivalence. Energy in any form has a mass equivalent. And if something has mass, then energy also has inertia.

The equation E = mc2 implies that mass has a connection to relativity, does it not? Let's talk more about that.

If the energy of a relativistic particle increases, then mass has to go up too. As weird as this is, it's also a safeguard. It would take so much energy to get a massive object to a relativistic speed that it's unrealistic. Hence, today's space shuttles travel at a mere 0.00005c.

Anyways, since mass also increases at relativistic speeds with the total energy, we have a relativistic mass m and a rest mass, or proper mass, mo. As we might've guessed, they are related by our friend γ with the equation m = γmo, where γ is as usual equal to

Lastly, in classical mechanics, we learned that the momentum of an object is equal to its velocity multiplied by its mass, or p = mv and that momentum is conserved. The conservation of momentum means it shouldn't change depending on a frame of reference. How can this hold true when we've just learned that velocities will transform from one frame to the other?

Since p = mv is only valid when v << c when the speed of the object is much, much less than the speed of light, just like the rest of Newtonian physics, we have to take into account the increased mass at relativistic speeds, or p = γmov.

Let's sum all this up in a list. Who doesn't love lists? Oh, put your hand down.

, because of Einstein's second postulate, the speed limit of the universe is c. 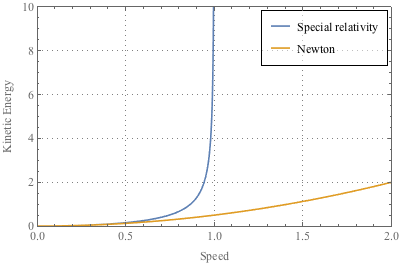 Any phenomenon that involves velocity in physics will be affected when speeds approach the speed of light. This means a quantity or vector will have two "sides": one measured at rest, such as rest mass and the other measured while moving, such as relativistic mass.

Particle physicists consider relativity all the time, as do astronomers, and as does every GPS device. Read all about relativity for a GPS system and more.

Once again, pay attention to the difference between rest mass and rest energy and the relativistic versions. Think through whether a number should be higher or lower than the another to recognize when the calculations go awry.

For deriving E = mc2, the equation at the source of nuclear energy, Albert Einstein was named the "father of the atomic bomb". In response to these accusations, he is quoted as saying: "The release of atomic energy has not created a new problem. It has merely made more urgent the necessity of solving an existing one."