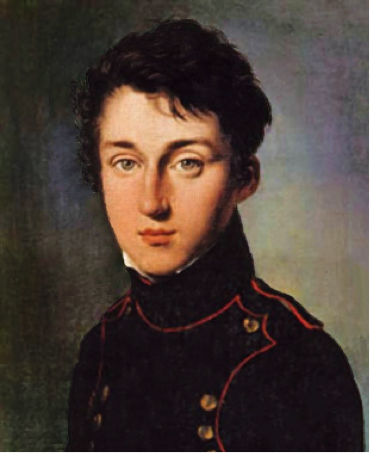 This is the part where we get to talk about the Napoleonic wars and cholera, and then think about what it would take to make the most efficient heat engine, given the restriction set by the Second Law of Thermodynamics. It all makes sense in context, trust us.

Sadi Carnot (pronounced Car-nō), the inventor of the Carnot Engine, was a French engineer and scientist born in Paris in 1796. An officer in the French Army, Carnot had to wait until the end of the Napoleonic wars in 1815 to concentrate on his obsession—the technological improvement of the steam engine.

In Carnot's time, steam engines were very important. We're talking "the iPhones of their day" kinds of important. They were used to do everything from grinding grain to building ports. They're no funny cat videos, but not too shabby for the 1800s. Carnot was convinced that it was the superiority of the British steam engine that had cost France the Napoleonic Wars. Talk about some serious motivation.

He realized that the efficiency of a heat engine depends on the temperatures of the hot and the cool reservoirs. An engine would be most efficient if the process of generating work were reversible—if we could return the heat that we moved from the hot reservoir to the cold reservoir, back to the hot reservoir, allowing the cycle to repeat forever and ever, like the (annoying) song that never ends.

This is summed up as Carnot's Principle: The most efficient heat engine is one whose process is reversible—the system is exactly the same before and after generating work. If the cold reservoir had a temperature of 237 K and the hot reservoir a temperature of 277 K, then at the end of the heat engine cycle those temperatures wouldn't have budged an inch. Er, a Kelvin; always double check your units.

All Sadi cared about was reversibility. There's no mention in Carnot's Principle of what medium actually does the work. It could be a gas or a liquid, or tiny gnomes; Sadi did not care. He said that all that matters are the temperatures of the hot and the cold reservoirs.

Revving Up the Carnot Engine

The Carnot Engine is driven but just such a reversible cycle. This engine has three parts. A piston in a cylinder contains 1) a working substance (such as a gas, liquid, or gnome), 2) a hot reservoir, and 3) a cold reservoir. Can you see the resemblance between the Carnot Principle and its child, the namesake engine? 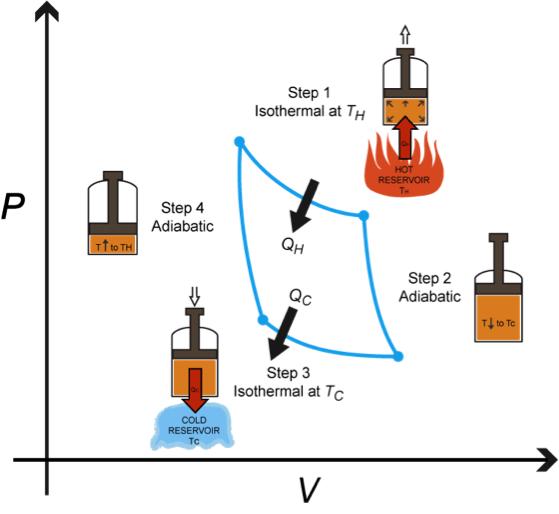 The Carnot Engine follows the 4 step Carnot Cycle. For the purpose of this explanation, let's assume the working substance is a gas. Remember, Carnot's Principle only requires that these four steps each be reversible. It doesn't care what process does the work.

Step 3, Isothermal compression: We now do work on the gas to compress it, but simultaneously hold the temperature of the gas constant. Instead, the heat, Qc is transferred to the cold reservoir.

Step 4, Adiabatic compression: In this last step, we also do work on the gas, but no longer allow the heat to be transferred to the cold reservoir. That means the heat has to stick around inside the piston, causing the temperature of the gas to rise back to TH.

Now we're back where we started, just like Carnot wanted.

As Good As It Gets

Carnot didn't just want "an" engine—he wanted a good one. What's that really mean, though?

The Carnot Efficiency of the Carnot Engine depends only on the absolute temperatures of the hot and cold reservoirs.

The only way that the efficiency of the Carnot engine could reach 100% (or 1, in the equation) is if Tc is zero. Zero Kelvin, that is. Now, 0 °C is easy to achieve; pick a random winter day in Canada and it'll probably be colder than that outside, but we're talking about absolute zero here. For all intents and practical purposes, that's completely unattainable. Pity.

So the Carnot engine still obeys the Second Law of Thermodynamics, that it's impossible to turn all of the heat energy into work (unless we find a way to hit absolute zero someday). Even so, the Carnot Engine is the most efficient engine of all heat engines. The gold standard, as it were.

In practice, it's impossible to build a completely reversible engine, because there's always some energy lost to friction. For instance, our car engines heat up as they operate, so they aren't perfectly closed systems. The engine, then, isn't in the exact same state directly after we run the car as when we turned the key. Sorry, Carnot, but you'll have to use a less-than-perfect engine to run your errands.

See, It All Comes Together In The End

Sadi Carnot died during a cholera epidemic in 1832. Because cholera is so contagious, most of his work was buried with him, which means that most of his writings were lost. We've come full circle and completed our journey, from the Napoleanic wars to cholera to heat engines. If it's any consolation, Sadi Carnot's name lives on. That's not much consolation to him, though.

Review the four steps in the Carnot Cycle as needed, because we definitely wouldn't want to treat an adiabatic process as isothermal, or vice versa. The horror.