The First Law of Thermodynamics 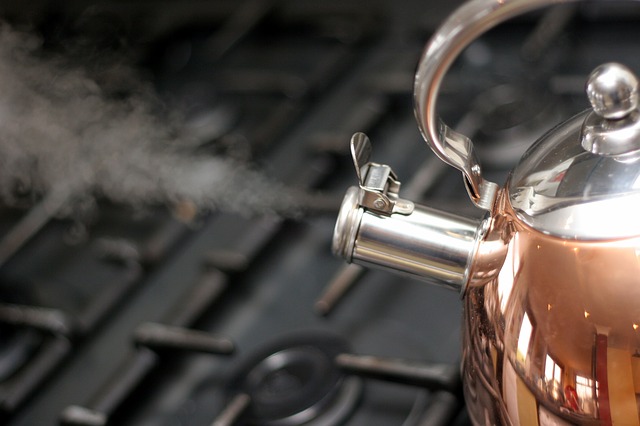 That sound means that it's time to get to work.

The First Law of Thermodynamics is "Do not talk about thermodynamics." Whelp. Lesson over, we guess.

Just kidding. The first law actually says that energy can't just disappear (or appear out of nowhere). It is conserved.

It also says that any "system" we observe, like, say, that Helium balloon we've been carrying along, contains three different types of energy.

A pot of boiling water is a nice everyday example to explain internal energy, heat, and work. However, it's not a good choice for applying the first law of thermodynamics, because the boiling pot isn't a closed system. Steam escapes from our pot of water to heat up the entire kitchen and condense on the kitchen windows. Heat can even leak out the sides of the pot itself.

There are too many things that the water can do in our boiling pot of water system to consider the system "closed." Energy is still conserved, but you would need a very fancy equation to account for that big puddle on the windowsill.

The change in the internal energy of the system, ΔU, or the change in how fast the molecules in our helium balloon are moving, depends on how much energy is transferred as mechanical work, W, and as heat, Q. Well there we go.

Watch out—this first law of thermodynamics equation is sometimes written with different signs. It all depends on the sign convention (positive or negative) for work, W. The equation above labels the heat, Q, and work, W, as positive when energy is put into the system. When we compress our Helium balloon and heat it, then both Q and W are positive. Switch the convention around, and we need to switch the signs, too.

So how do we calculate how much work is done on our system, the helium balloon? It sure doesn't fill out a time card after each shift, that's for sure. Instead, the amount of work is related to how much we compress the balloon (which raises the pressure, P) and on how much we change the volume of the balloon, ΔV. Here's the equation.

This would take a lot of pressure, P, if the balloon we'd just blown that balloon up. It would take a lot less pressure if the balloon was on day 7 of its post-birthday party decline. So the total amount of work we do is different in the two scenarios, even though we're cutting the volume in half each time. We have to take the difference in volume, not the ratio of volumes, for the work equation.

When we go to compress the balloon, it's pretty easy at first. The smaller the balloon gets, though, the harder it is to compress it even further. It doesn't get to be actually hard, but still. The amount of work we have to do changes as we compress it further. It's kind of like school—the further into the year we get, the more the pressure builds, until we're trying to cram for five final exams at the last second.

To account for all these changes in pressure and volume, we draw PV diagrams, like this one. 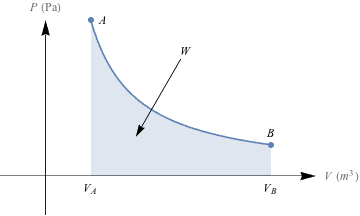 As we compress the balloon from volume VA, to VB, the pressure changes. The amount of work, W, done is equal to the area under the PV curve. Unless you've already got some calculus under your belt, it's a pain and a half to find this kind of area, so we'll just sidestep the issue for now.

So how much work is done when we change the pressure of a gas without affecting its volume? It's Picasso time—let's draw a PV graph for this scenario. 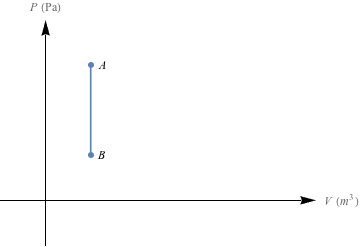 The area under this PV curve is zero – no work is done here. It's useless. Well, for work.

One final example: In which case do you think we're doing more work? 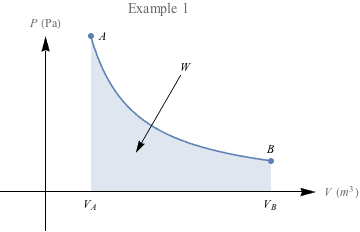 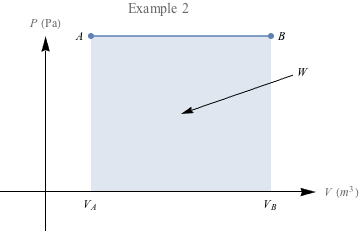 When pressure remains constant, we have an isobaric process. This makes our calculations easy-peasy, because we can apply the first law of thermodynamics without having to do any calculus, just W = -PΔV and ΔU = W + Q.

The process in the first example we discussed, with constant volume while the pressure changes in the gas, is called an isovolumetric or isochoric process. Now give us a second to untie our tongue.

Okay. We already determined that W = 0 in such a volume-saving process, so ΔU = W + Q simplifies to ΔU = Q.

We could also change the volume of a gas while keeping the temperature constant. This is an isothermal process (not to be confused with thermal underwear). Since the temperature reflects the internal energy of the gas, or how fast the molecules of the gas are moving, ΔU = 0. In this case, ΔU = W + Q simplifies to W = -Q.

All of the work done on this type of system is transferred into heat, Q. Calculating the amount of work for this case requires a fancier equation than the others. It is

, where n is the number of moles of gas, R is the gas constant, T is temperature, and V is volume. It left the top hot and monocle at home, though.

Lastly, a process can also be adiabatic. In this case, there is no exchange of heat between the gas and the environment (which means there's some kicking insulation installed),, so Q = 0 and ΔU = W + Q, which simplifies to ΔU = W. Nice, nice. We can then determine the work itself by

In both cases, heat, Q, is positive when it is put into the system and negative when it leaves the system. Be sure to put in the work to know what kind of work you're doing, or you'll be working overtime to fix your mistakes.