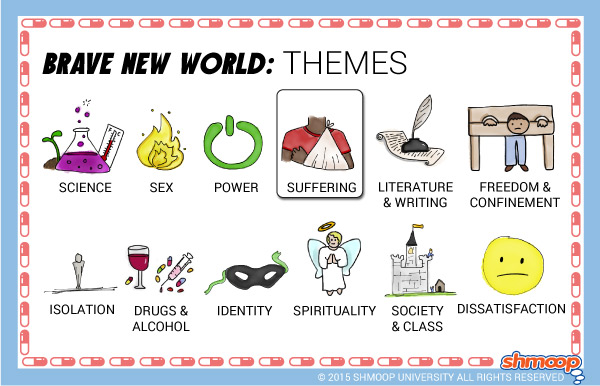 Brave New World takes place in a tightly controlled world where technology has all but eliminated suffering and a widely used narcotic called soma dulls whatever momentary pains may arise. It may sound like a pretty chill set up, but it's definitely not. But why, you ask?

Have you ever read Shakespeare? Listened to Mariah Carey? You'll notice that suffering is a central part of the human experience. Without suffering, people somehow become less than human.

Self-inflicted pain becomes, for one character, a way to regain his humanity as well as a spiritual cleansing. God, he explains, is a reason for self-denial. This is of course tied to the notion of an afterlife: denying the body in this life will be good for the soul in the afterlife. Christianity especially espouses this theory, as suffering for one's sins is one way to emulate Jesus Christ. Suffering may certainly suck at times, but a world without it means a world without love, purpose, or compassion.

Inflicting pain on oneself is the only path to liberty in Brave New World.